It's been a month and there are no changes.  I still have my knuckle ulcers. 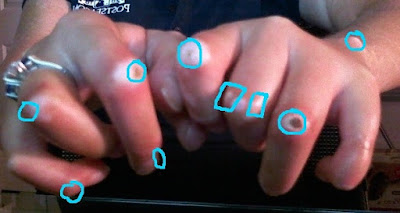 Everything with a circle is sore.  Some of them are really small and almost gone.  Not really causing any issues, except a dried scab getting caught on a shirt or a blanket.  The larger ones still have a ways to go to heal.

The two squares aren't sores, but spots where the skin is so tight and the finger is bent, that it seems as though the knuckle bones are going to start protruding through the skin.  Something I'll have to discuss with the man on my next visit.

I seem to be picking up on routine naps again.  I was hoping it was just a phase, but it seems that at least 3 days a week I have to go take a nap.  Sometimes as long as 2 hours!  I'm even back to falling asleep in the passenger seat of the car if we go anywhere.

On the whole, I feel pretty good.

I am frustrated that I don't seem to be building muscle back fast enough in my quads.  I'm not even sure it's returning at all.  I've been doing riding therapy for almost a year and still need help getting in the saddle.  I hope it's not something that's "lost forever" like the lost abilities of my hands.  If it is, I'll deal.  It's been this way since 2004, so I'm used to it.  I'm just hoping for more.  I'll keep working at it though and I'll see where it ends up.

I have found a bicycle that will hopefully work for me!  I'm very excited!  We have all of these beautiful shoreline paths along the bay and the ocean here that would be perfect to do some cycling along.  I've searched and searched online and found that bike and then I found a shop here in Tampa that has them.  They assemble and set it up just for you and you get free tune-ups for a year.  Now, hopefully they can change it so that the braking is done with the feet and not the hands and I'll be all set.

Wish me luck!
Posted by LoJo at Monday, March 14, 2011
Email ThisBlogThis!Share to TwitterShare to FacebookShare to Pinterest