After my thyroid issues, things were quiet and I was healthy for a few years.

In the fall of 2002, I started noticing that my hands would get unusually cold, blue, and go numb while I was at work. I was a computer geek as my day job, so I worked in areas where the temps are kept quite cool to maintain the servers and computer equipment. So, at first, I just dismissed it as, it's cold in here. 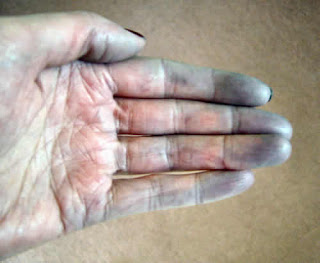 This is what a severe Raynaud's episode can look like

Then I noticed the skin on my fingers was hard and peeling really badly. Almost like a snake molting its skin. I had just returned from a week long trip to California and attributed the skin changes to going from our humid climate, to the desert, back to humidity.

I let this go on for a week or two more until my co-worker urged me to go get it checked out. My fingers would be REALLY blue at work and was kind of freaking people out.

So, I made an appointment with the good doc and was sure that he'd tell me there was nothing wrong me. I was sure I wouldn't have any evidence to show him of the blue fingers because it only seemed to happen at work. Well, we know how cold they keep those dang doctor's offices! By the time the doctor came in to see me, my fingers were nice and bluish-purple and all ready to be checked out.

He asked me what was going on and I gave him all my explanations while he looked at my hands. When I was done talking, he said "You have Raynaud's Phenomenon." He explained that when my body senses any amount of cold, it "freaks out" and closes the vessels in my fingers to keep the blood flowing to my core to protect my major organs. This can also happen in the toes, nose, and ear lobes.

Sometimes it can be a condition that occurs all by itself, called Primary Raynaud's. Other times, it can be secondary to another condition, usually one of a list of autoimmune diseases, if it is an underlying condition, then it is called Secondary Raynaud's.

Since I already had autoimmune thyroid disease, and the peeling and hardening factor in the skin on my fingertips, the doc thought it was a good idea to run a myriad of other tests to see if anything else is going on. He told me he thought I might have Scleroderma.

At this appointment we didn't get into that just yet.  He wanted to get the test results first.
Posted by LoJo at Saturday, April 24, 2010
Email ThisBlogThis!Share to TwitterShare to FacebookShare to Pinterest

So glad you are writing all this down. Seeing the process is enlightening to me, I am sure though it brings up a whole slew of feelings recalling each terrifying step. It takes a strong person to recall and recount details like this.