When I Blamed Scleroderma for Stealing my Identity

Once upon a time I thought Scleroderma stole so much from me. Since, my perspective has changed, but here's another article I wrote for "The Mighty on this subject.
Posted by LoJo at Thursday, August 31, 2017 No comments:
Email ThisBlogThis!Share to TwitterShare to FacebookShare to Pinterest

I had my first reflexology appointment this week. It was an interesting and incredible experience and I will continue to get this treatment on at least a monthly basis.

Rather than go into the details of what Reflexology is and the benefits it can have, I'll let someone else explain that. Why re-create the wheel? Here's a great explanation that I found to be awesome!

Because of every single thing described above.

Because my feet are a hot mess. They have issues all over the place. Chiropractic care and massage help, but I'll take what I can get. If I don't keep my feet functional, I'm screwed. I have adapted a lot for my hands. It's been a struggle and yet, I make it work. If I can't use my feet, life will become exponentially more difficult. I'm only 40. I'm not ready for that yet.

Because of the idea that my body feels and operates better with various treatments versus medications. Why not add one more to the toolbox?  I've discovered that Eastern/Chinese what-have-you treatments and exercises work wonders and reduce the need for factory designed drugs. These treatments have usually been around for thousands of years ... I find logic in the idea of "if it ain't broke don't fix it" - meaning, if these treatments have been around for this long, there's something to be said for the effectiveness. Additionally, I'll take the word of numbers of people promoting them because they make their bodies feel and function better - no big company or corporation is paying for that "research" and then reporting only findings that promote their product. People are just reporting that they feel and move better. That's enough for me.

After relaxing in the awesome quiet, dark and cozy lounge area at the spa, I was taken back to the treatment room by Katie. Though she is skilled in various beauty services, let me assure you, she was very proficient at this bodywork service, too!

First, she gave me a foot bath while we discussed my condition and what she was going to be doing throughout the treatment. When I spoke about Scleroderma, I was vague and just noted that it affects my joints and connective tissue, to include various organs.

After the foot bath, I climbed on the table and got all snuggled in under the fuzzy blanket with an eye pillow and heated neck wrap. Really, this could have been enough.

She started with my hands and worked with them the best she could considering their condition. The pressure in the palms of my hands, seemingly forcing my hands open in ways they no longer can achieve on their own .... felt AMAZING! Like a release from the constant inward curling and contracting.

Then came the feet. This was a comical situation of sorts. This is where it felt like I was seeing a fortune teller. 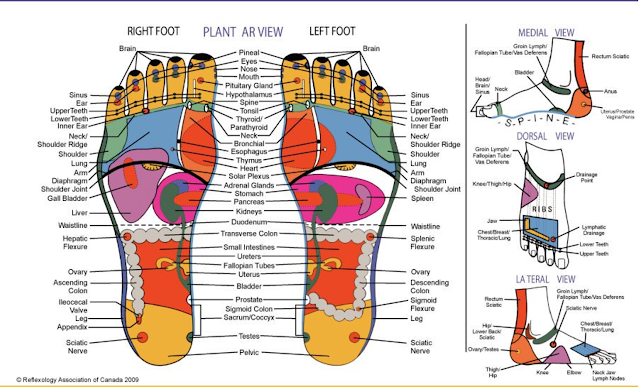 If you've ever watched a fortune teller on TV, you see them pull a card or whatever tool their using and saying things like "I'm seeing/feeling darkness. Has there recently been a loss in your life?" ... or something to that affect. So, as she's working different locations on my feet I could definitely feel the discomfort and pain I carry in those locations ... only amplified with the direct pressure, and eventually being lessened or released with her techniques.

At some of the more intense locations, she would say "this feels really hard or tight to me. It connects to _________." Would you believe that every point that was "intense" for me and she could feel a difference is actually a place in my body that I have or have had issues with:

There were plenty of locations on my feet that just enjoyed the pressure and massage with no discomfort. In the end, anything that started in discomfort felt more open and relaxed and extremely less tense.

I was definitely light headed when I got up. Definitely relaxed. Super thirsty. I'm rarely thirsty.

Katie had said that some people claim to be hungry after their session. Oddly, I was! Again, NEVER hungry because of my lazy stomach.

I noticed that throughout the rest of the day my hands definitely felt less tight and the skin on the back of my hands had a more even look to the tone and color. It appeared to be less blotchy than normal.

I continued to be thirsty. I drank at least twice my normal amount of water. Which is to say - I actually drank water.

I slept great that night and experienced the longest amount of "deep sleep" (according to my monitor) that I have since I started monitoring my sleep patterns.

The next day I was a little alarmed as I woke up with increased pain in my right frozen shoulder. I wasn't super happy at this revelation, but just went with the flow. Interestingly, in the days since the treatment, I have become aware that my frozen shoulder aches less and I have some increased range of motion. I am aware of this because I needed to get something down from a shelf above my head. (Not to worry, I'm removing all shelves and cabinets that are above my head for this reason) Normally this would be painful as I'd have to push through to get my arm to reach and my shoulder would "click" like it would "catch and release"... I prepared myself for this to occur and it didn't.

The same type of scenario occurs when I brush my horses mane. Not for the last two mornings.

I of course have no conclusive scientific measurements that reflexology did these things, however, if that's the only "new" thing in my routine - what else would I think?

I've already schedule my next appointment.

💋🤘🏼
Posted by LoJo at Sunday, August 27, 2017 No comments:
Email ThisBlogThis!Share to TwitterShare to FacebookShare to Pinterest

One Phone Call Changed It All

After that phone call with Kathy in May and the two weeks in Reno, in June, things have definitely changed!

While in Reno, I met a woman with Scleroderma who does yogic hand exercises that Kathy taught her, yogic breathing practices, as well as attends Kathy's weekly class. This woman started all of these practices just after being diagnosed with Scleroderma. When she started, she was doing yoga in a chair. Now she is:
Read those bullets again and let that sink in. Additional proof that yoga can help this (and other) disease!

Now I KNOW we have to get this information out to the masses. It's time to get this passion of mine set into motion! Since yoga has been such a help to my body, I've wanted to be able to give that gift back to the community, but didn't know how. It's not like there are large numbers of Scleroderma patients close by.

Since starting this journey with Kathy, we have presented and taught at the Scleroderma Foundation's Scleroderma National Conference in Phoenix in July and at a Yoga for the Special Child Summer Conference here in Sarasota at the beginning of August.


While I was in Phoenix, I was asked to participate in a project where they take your picture and you share your story - a "Faces of Scleroderma" type thing ... what was supposed to be a couple of snapshots turned into a full on photo shoot because the photographer and I connected. I'm actually excited to see these photos, as I typically don't like photos of myself anymore, but these were beautiful. Even before editing.

I'm now also an ambassador for a grass roots organization called Accessible Yoga which works to provide yoga to people with all sorts of limitations - be it from diseases or trauma - as yoga really DOES change our bodies and help with disease maintenance. So, I'm heading to an AY conference in San Francisco in October and will be presenting and learning from others while there.

We've been asked to present in Philly in July of 2018 for the Scleroderma Foundation's National Conference again, as well as various rumblings with "invites" to Canada, and other U.S. locations that want to learn from us, so that they might be better able to help their communities.

I've also started writing for "The Mighty" - an online publication. My first piece was published two weeks ago and I'll be submitting another soon.

I'm discovering that having new focus and working to fuel my passion has also had positive disease affect. I stay on track more with diet and daily yoga practice now. If I'm trying to help others live better lives with their disease, I need to be on my A-game, as well. I have to lead by example.

Having these things fill my time also keep my brain positive and upbeat. I feel like I'm contributing to the world in ways I was never able to before. That all has an affect on disease activity and flares, as well. In a positive way!

I've been to see the cardiologist and rheumatologist recently an things are looking pretty stable. The protein in my urine has disappeared and while I have some pulmonary hypertension activity, it doesn't appear to be new. A pulmonologist visit is scheduled for October, as is a bone density scan. I want to see where I am in relation to my last bone density test a few years ago and use the recent tests as a new starting point to improve those numbers through lots and lots of green leafy derived supplements and weight bearing exercise.

Left hand surgery is in the process of being scheduled, as well. I'll be having the remaining three fingers amputated at the middle knuckle. The current full fist is no longer cutting it for me. It's slowing me down too much and I am confident (and have discussed thoroughly with two docs) that this plan, while drastic, is the path I need to take.

I added reflexology to my list of treatments this week. What an amazing experiencing. I'll be posting a blog with details about it soon.

Persevere and Rock On, my Sclero Slayers! Keep those bodies moving!

Writing for "The Mighty"

I started writing for the online publication "The Mighty" to hopefully reach more people and help others continue to live quality lives.

My first article is here.
Posted by LoJo at Thursday, August 17, 2017 No comments:
Email ThisBlogThis!Share to TwitterShare to FacebookShare to Pinterest
Newer Posts Older Posts Home
Subscribe to: Posts (Atom)