Aside from feeling like I was interrogated.  You know the kind where the interrogator asks the same question repeatedly until they break you into giving them the "correct" answer.

The cardiologist had looked over my records that had been faxed from Baltimore and was looking over the history I had completed and kept asking me about my breathing.  Like 5-7 times.

I know that my tests and such indicate that I "should" be having certain symptoms (i.e. breathing difficulties) but I'm just not.  I was worried he was going to keep asking until I relented and said "YES!  OK?  YES!  I HAVE BREATHING DIFFICULTIES!  IS THAT WHAT YOU WANT TO HEAR?"

Finally, he gave up.

He did an ekg and gave me the prescription that "the man" wanted me to have and told me I have to come back in 2 weeks to make sure I'm handling the med ok, get another echo to see if the med is helping and increase the med to the new dose.

This med starts at a low dose and works up.  So, it sounds like a lot of 2 week visits in the near future.

As long as there's no water-boarding, I'm ok with that.

So, that's 2 new pills to the cocktail everyday.  So, here's a tally for anyone that's counting ... I'm a whopping 34 years old and I take reflux meds, steroids, thyroid replacement, immune suppressors, baby aspirin, meds for circulation, heart meds, and I'm supposed to take calcium & vit D to keep my bone loss in check.

Not that I'm complaining OR counting.  It's much less than the 20+ I once took.
Posted by LoJo at Tuesday, June 21, 2011 2 comments:
Email ThisBlogThis!Share to TwitterShare to FacebookShare to Pinterest

I had a cold last week.  I still have it into this week.  It's mostly just that leftover junk that gets in your sinuses.

Last week, I was down for the count for about 7 days.  Bleh.  Two of those days, I literally, moved from the bed to the sofa and that was it.  I had the chills and had to sleep under my electric blanket for two nights.

My immune system did well and fought it off.  I was happy.

However, last night, I was in bed by 7:30.  Exhausted and with a sore throat.  This morning I feel ok-ish.

Hopefully it was just a fluke.

Time will tell.
Posted by LoJo at Friday, June 17, 2011 No comments:
Email ThisBlogThis!Share to TwitterShare to FacebookShare to Pinterest

I found a new cardiologist.  My first appointment is set for Jun 21st.  Just a few weeks away.

While it will be nice to have a doctor close to home to work with, I dread starting over.   With a new physician.  Possibly one that has no Sclero experience.  There's no way to tell in advance.  It's a crap shoot, really.

I researched to find a good cardiology staff.  They selected the doctor.  Hopefully he's a good fit.  Hopefully I don't have to look for another one and start the whole process over.

It would be one thing if I had a clean bill of health and nothing to explain.  Wouldn't that be nice?  But then, I guess I wouldn't be seeing a cardiologist at the age of 34, now would I?

Hopefully, it all goes off without a hitch.
Posted by LoJo at Friday, June 10, 2011 1 comment:
Email ThisBlogThis!Share to TwitterShare to FacebookShare to Pinterest

Did I mention I get sores on my elbows too?  Yeah.  Fun.
They get just as nasty and achey as the knuckles.  They start getting pulled in and trying to heal together and it hurts.  Sometimes they hurt so bad, it's hard to bend or straighten the elbow.  Sometimes, they make the muscles around the area sore. 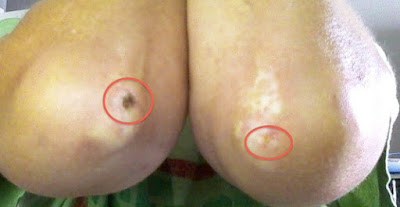 Sometimes, they start pulling SO bad, the only release, is to pull the scab off, just to release the pressure.  That's why the one on the right, in the picture, doesn't look as bad.  Because it's minus the big nasty scab.  I had to pull it off this morning at 0330, just so I could bend my arm to get comfortable to sleep.
What the hell kind of plan is that?  Who knows, but it works.
Posted by LoJo at Saturday, June 04, 2011 1 comment:
Email ThisBlogThis!Share to TwitterShare to FacebookShare to Pinterest

My knuckles have been VERY sore the past couple days.  Sometimes, excruciating.

I haven't told anybody.  It's kind of a given, so I don't like to verbalize it, too much.

They just ache.  The pressure in the ulcers just hurts.  The scabby material, doing, whatever it is that it's doing, aches.  Sometimes it has shooting pains.  It wakes me in the night.  Rolling over and rubbing one on the blankets when I move, hurts.

If they get cold from the a/c, it hurts.

Anything touching them hurts.  Even water.

I would like to just lock myself in a hole for, oh, a few months until they heal.  Yet, I don't want to not live my life.

The idea of sitting on the sidelines to avoid getting the ulcers, makes me a little nauseous.